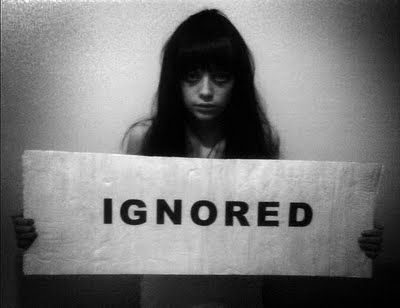 “Loneliness and the feeling of being unwanted is the most terrible poverty” (Mother Teresa).

Have you ever felt like you were being ignored?

Have you ever worked in an office where a co-worker made the point of chatting with everyone else but never with you?

Have you ever sent out a friend request on Facebook and not even gotten the dignity of a response?

Have you ever texted or messaged someone and it seemed like that person didn’t even feel you were worth bothering to respond to?

Have you ever felt that no guy or girl ever even saw you as a romantic possibility or even thought about you as anything other than a friend?

I read this week that to feel ignored is the worst feeling of all. I agree. It hits at one of our most vulnerable spots– the need to feel valued and appreciated as a human being.

When someone ignores you, that person is essentially saying to you, “You don’t matter. You have no value.” It’s demeaning not only to that individual, but also to the God who created them (see Psalm 139).

Jesus knows exactly what that feels like. He stood before Jerusalem, weeping because they refused to turn to Him so that they could have true and eternal life.

Jesus would rather go through the hell of crucifixion and death for you than go to heaven without you. If you had been the only one, He still would have gone through all of the torture and pain because He thought you were worth it. And He still does. He still thinks you’re to die for.

Jesus’ love for you proves once and for all that you have worth and value. You matter. Whatever anyone else ever says or does to you will never negate the fact that your Abba loves you and is very fond of you. He has forever set His affection on you and nothing and no one can ever take it away.

Maybe you’re reading this and realize you’ve been guilty of ignoring someone, either consciously or otherwise. Maybe you’re feeling a tug at your heart compelling you to go to that person and make it right. Don’t let another day go by until you repent before God and restore that relationship.

Remember, God’s heart is still for the widow and the orphan, the outcast and the forgotten, those that society ignores. He still blesses those who bless them. In the Kingdom of God, everyone has a place. In God’s call, everyone is to hear the Good News; no one is ever to be left out.

I now understand that sometimes people are too overwhelmed by circumstances to see me. Sometimes, it’s all they can do to hold themselves together and not fall apart completely. The best thing you can do for someone who doesn’t acknowledge you is to pray God’s peace and healing over them. To pray they know in that very moment that God sees them in their pain and knows where they are.

God, you see us when no one else does and You’re with us when we feel most alone. Be with the ones feeling alone and may they feel You near in the moment of their greatest need. Amen.

2 thoughts on “Blessed Are the Ignored”

This site uses Akismet to reduce spam. Learn how your comment data is processed.